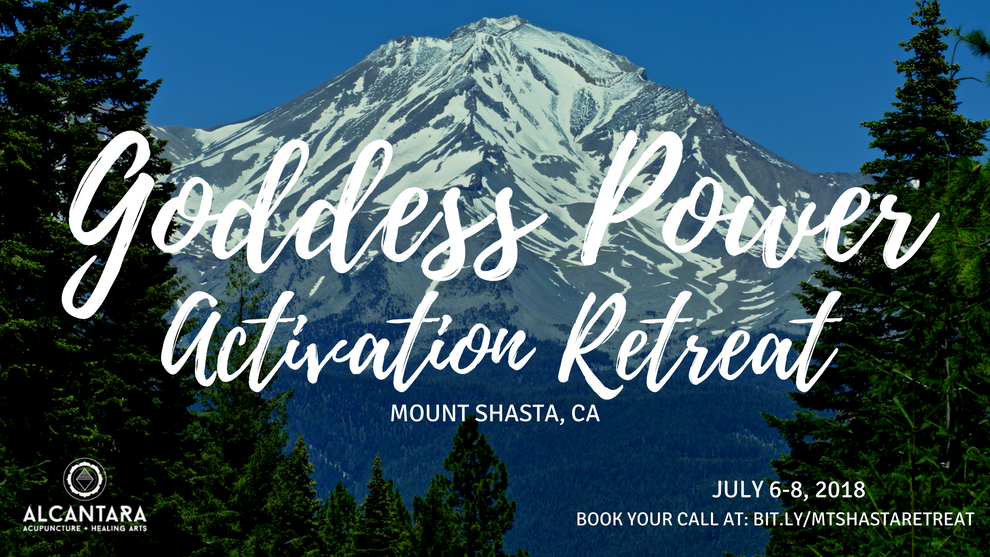 If you’re a woman who:

Then, join us in July for…

On the weekend of July 6-8th, 2018, I will be holding ceremony to open, and activate, a Power Portal on Mount Shasta. As a Medicine Woman of the Mayan/Toltec tradition, I will be calling forth the Essence of the Light (in fact, my Medicine Name is Uetzcayotl Chup, “Essence of Light Woman”.)

Here’s why I’m holding this retreat:

Almost 2 years ago, I awakened as a Sirian Starchild. I was flooded with information about my mission on this planet as a conduit between the Star Nation and Mother Gaia, which involves elevating our planetary consciousness by activating Gaia’s Power Codes, using my codes of Power and Unity Consciousness.

As a mouthpiece for the Goddess Consciousness, and an embodiment of Mother Gaia, I’ve since been channeling healing transmissions from the Goddess every Monday afternoon at the Mother Gaia Power Portal on the Alcantara Acupuncture & Healing Arts FaceBook Page and activating Goddess Power Codes in other Goddesses, so they may embody them.

I am receiving directives from Mother Gaia to create portals of Power all around the world, at various sacred sites. And, She wants me to start with an inaugural ceremony at Mount Shasta!

I’m only taking a limited number of Goddesses with me.

Are YOU one of them?

On January 31st, the day of the potent Super Blue Blood Moon Eclipse, I announced my big retreat news on Facebook Live, performed an activation that opened a portal for the Mount Shasta retreat, and turned on an amethyst generator at the base of Mount Shasta. During this activation, we were greeted by Beings of Light, welcoming us for our powerful work in July.

Can you imagine? Beings of Light are crossing their dimensions to join us at this Divine elevation of our planet, and they will bear witness to your initiation into your Power!

AND, I still have some spots left!

HERE’S WHAT WILL HAPPEN AT THE RETREAT:

Never has there been a retreat (until now) where participants get initiated into their Goddess Power, usher in the New Earth energy of the Goddess Power Consciousness, and witness Mother Gaia’s activation into it! It is a true planetary awakening, and you get to be part of making it happen.

The is NEW New Earth energy we’ll be working with, and it’s going to be nothing like you’ve ever experienced before!