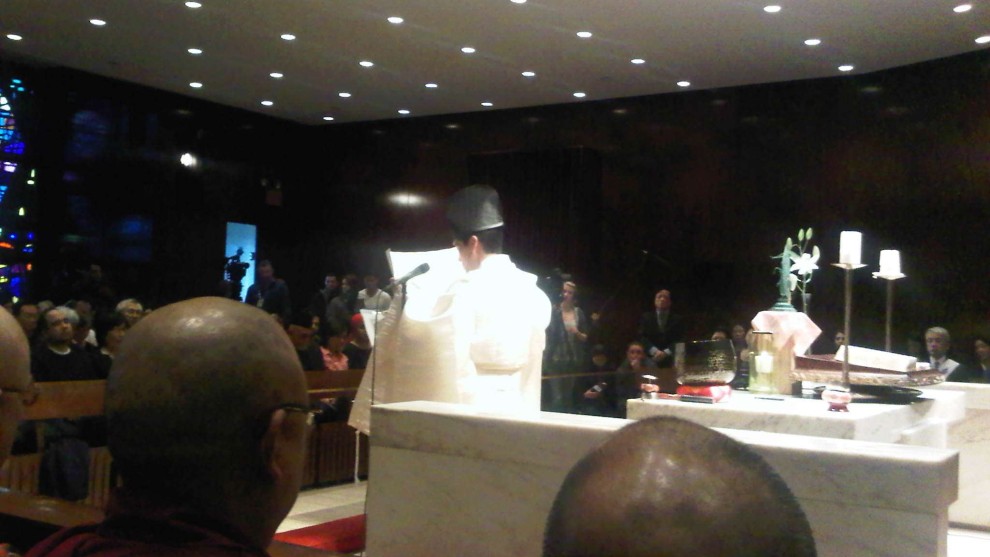 A shot I captured of the Shinto priest praying.

In Solidarity: A New York Ceremony and Vigil for Japan Child with Japanese Flag. I took this photo during the vigil part of the evening at Dag Hammarskjold Plaza.

The Ceremony For Japan:

On Friday, March 18, 2011, I attended a prayer service and candlelight vigil for Japan, which began with a ceremony at The Church Center for the United Nations.  The main organizers were Rev. T. Kenjitsu Nakagaki, an ordained Jodoshinhsu Buddhist Priest, and Emiko Nagano, volunteer community organizer of the humanist movement.  I mainly wanted to attend to show solidarity and be part of the collective love and hope being sent to Japan, at the first week anniversary of the earthquake and tsunami in Japan.

I have been to an interfaith church before, but none that had all of the symbols of different religions visible.  First thing that I noticed was how many cameras were there, constantly snapping away.  And many folks in the pews were taking photos with their phones, so I took a few Blackberry shots of mine own (some turned out better than others.) 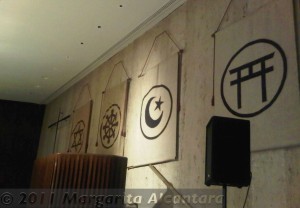 Inside the Interfaith Church at the UN. I took the best shots I could with my Blackberry, in a tightly packed church.

The place was packed.  The majority of people attending were Japanese, but there were a lot of non-Japanese there, as well.  It makes a lot of sense that such a church was situated right across from the United Nations.  It was rather beautiful, with all the dark wood.  They had donated their space towards the special occasion.

It began with an optional incense offering, and a welcome made by Rev. Kathleen Stone, on behalf of the Church Center for the UN, and Rev. T. Kenjitsu Nakagaki.

As a ceremony, I’d expected the spiritual aspects.  But I had never really attended a ceremony headed by various types of buddhist priests (Rev. T. Kenjitsu Nakagaki, Jodoshinshu Buddhism;  Rev. Shogen Kumakura, Nichirenshu Buddhism, and Rev. Masamichi Kamiya, Rissho Kosei-kai Buddhism); Rev. Masafumi Nakanishi, a Shinto priest; and Rev. Yugo Suzuki, a Christian priest.  In the pew right in front of me were all buddhists in saffron colored robes.  I watched all the various priests go up to the podium with such exactness, almost choreographed, even to the specific turn at the altar corner, to the bow at the altar.  And then they would talk about how we could help Japan by sending them our intention that they will overcome this disaster.  The buddhists in front of me nodded.  It was quite poignant.  I could’ve sworn that through the chant-like prayer of the Shinto priest, I heard his voice crack, and a noticeable holding back of emotion happened.  He quickly regained composure without skipping a beat, having evidently done this for quite some time, though perhaps not under these circumstances.

Then came the time for words by Riki Ito, President of the Japanese American Lions Club, Gary Moriwaki, President of the Japanese American Association of New York, and Fumiho Suzawa, of the Consulate General of Japan.  Afterwards, Taka Kigawa, a pianist, performed various works of Chopin, which was rather beautiful.  There was a lot of time for silent prayer and meditation, and the comforting waft of incense filled the room, on that unseasonably warm day.

When the significant point of silent prayer and meditation came, towards the end of the ceremony, everyone was silent.  The incense softly burned, the buddhist priests rang their bell regularly, everyone was quiet, many bowing their heads, their hands in prayer and touching their foreheads. Took while waiting in line to offer incense.

We were then invited to make an offering of incense in these two large gold bowls, which had coals lit, sitting atop sand.  I stood in line to take a pinch of incense from the white bowls, and sprinkle them atop the coals that burned in the larger bowls.  It is amazing how such various walks of life could unify on such a spiritual level.

Afterwards, we were given instruction by Rev. T. Kenjitsu Nakagaki that the candlelight vigil was to take place at Hammarskjold Plaza, which was about three blocks away.  But he also let us know that the New York Police and Fire Departments weren’t allowing us to light actual candles, and so we would have to bring the light from our hearts.  Either that, or we could take one of the limited glowsticks available.  I thought, “After all the years of rallies, demonstrations, and vigils I’ve been to in New York City, this is the first I’ve heard where we have to carry glowsticks rather than actual candles.  Are they serious?” 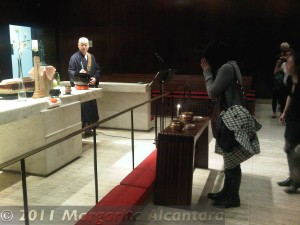 Incense Offering, with a Buddhist priest ringing the bell.

As people filtered outside, many of the cameras centered in on interviews with Rev. T. Kenjitsu Nakagaki, and attendees of the ceremony.  There were two cops standing outside, watching us, and, I suppose, making sure the buddhists weren’t creating any trouble! We then walked to Dag Hammarskjold Plaza, as the darkness of night started to set in.  There were about 100+ people who turned out for the vigil.  The folks with their cameras perched on top of the ledges to catch the action.  I wasn’t surprised to find that many people had started to light candles, even though we were advised not to.  I asked a women where she got her candle.  When she saw I couldn’t find one, she offered her glowstick.  Not quite as glamorous and impacting as the candles, but I wasn’t complaining.  Emiko Nagano then led us into reminding us why we were there, to put out a call for the well-being and safety of everyone in Japan.  As she led her ceremony for the vigil, that’s when I started hearing the sniffles of people sobbing in the background.  The silence of this mass of people listening to Emiko was powerful, and we were all feeling it. Bird’s eye view of the vigil

At various points, she gave us a few minutes to meditate.  I smelled the familiar incense burning nearby.  A child nearby was gleefully waving a paper Japanese flag and smiling, while sitting in his mother’s arms.  The irony made my eyes water a bit.

After Emiko spoke, she invited others to come up to the mic to speak as well.  One woman said that we need to not only think of Japan, but the world as a whole.  A man later remarked that we do indeed need to focus on Japan, and our efforts to help them through this devastation, and that’s what this vigil is for. 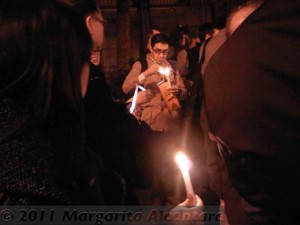 The vigil ended, and the cameras came out again, interviewing people who’d been part of it.  I was approached, as well, by two New York University (NYU) students.  When they mentioned they were undergrads at NYU, I mentioned it was my alma mater (one of them, at least!)  They were interested in finding out why I went, and what I got out of it.  After a short interview, we were done.  Everyone dispersed quietly, with no trouble from the cops for our candleburning.  Interestingly enough, their presence was not as noticeable during the vigil.

Various benefits, fundraisers, and interfaith gatherings are being slated.  One of them, called “Interfaith Time of Reflection: Benefit Event for Japan”, is coming up on Sunday, March 27th, from 4-6pm, at The Riverside Church (490 Riverside Drive, between 120th-122nd streets.)  There will be an interfaith gathering, with performers, and speakers.  Hope to see you there!

This website uses cookies to improve your experience while you navigate through the website. Out of these, the cookies that are categorized as necessary are stored on your browser as they are essential for the working of basic functionalities of the website. We also use third-party cookies that help us analyze and understand how you use this website. These cookies will be stored in your browser only with your consent. You also have the option to opt-out of these cookies. But opting out of some of these cookies may affect your browsing experience.
Necessary Always Enabled
Necessary cookies are absolutely essential for the website to function properly. This category only includes cookies that ensures basic functionalities and security features of the website. These cookies do not store any personal information.
Non-necessary
Any cookies that may not be particularly necessary for the website to function and is used specifically to collect user personal data via analytics, ads, other embedded contents are termed as non-necessary cookies. It is mandatory to procure user consent prior to running these cookies on your website.
SAVE & ACCEPT