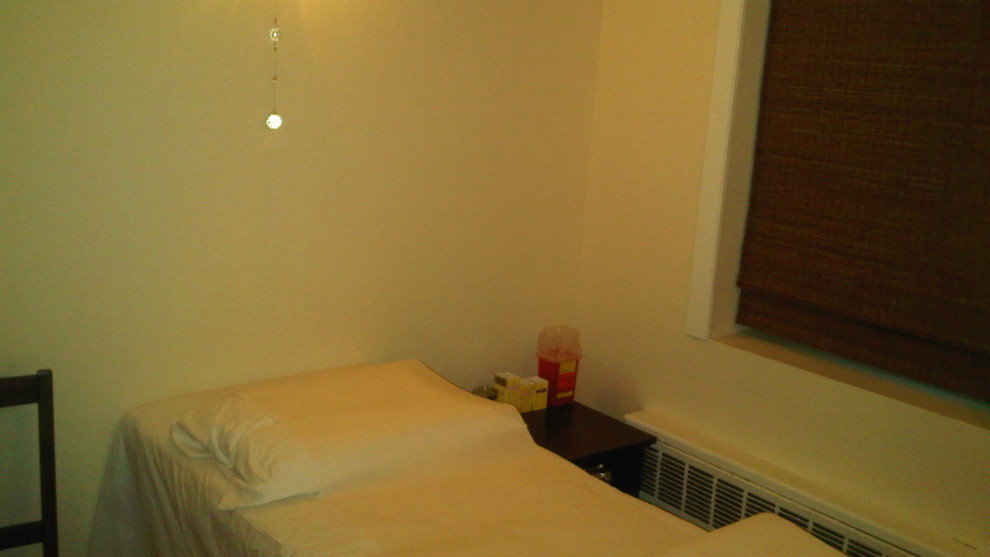 The serenity of my office space in the Flatiron district, NYC.

Language Not A Barrier In Getting Your Qi On

Special Pre-Actual Blog Note:  Come join me tomorrow, 11am-3pm, at Bronx Community College’s Health Fair, where I will be performing auricular NADA protocol on behalf of St. Ann’s Center for Harm Reduction (SACHR) (check out my previous post on my current work at SACHR.)

Besides working out of my private acupuncture practice during the week in the Flatiron district of New York City (very close to the Union Square area, see my website for info), I also practice at St. Ann’s Center for Harm Reduction (SACHR) in the Bronx, where I perform mostly NADA protocol and give ear seeds, but also give full body treatments for those struggling with drug addiction and homelessness.

Most of the population I serve there are Latino, particularly Puerto Rican.  Even my coworkers are mostly Puerto Rican.  Everyone speaks Spanish fluently.  Interesting predicament, since even though I can pass for Latina (as well as various other cultures!), and am part Latina, and can speak some Spanglish (a terribly embarrassing mixture of Spanish and English), I can in no way compete with the language of the Telenovela.

In fact, I have even created a new word:  Spagolog.  A mixture of Spanish and Tagalog.  Because, that’s what I want to speak when I’m at St. Ann’s. 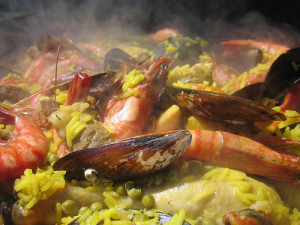 Paella, a common Spanish dish that is now a Filipino dish. Why do I keep getting drawn to include pictures of food in my blogs when I’m an acupuncturist? “Paella” by Sebastien Bertrand, used with permission under CC BY 2.0.

I am a mixed blood gal who grew up with Filipino traditions, and have grown to understand some Tagalog (the Filipino language.)  The people of the Philippines have roots in Malaysia, but with the colonization of the Philippines by the Spanish for 300 years, Spanish culture has seeped into Filipino life through traditions, names, food, religion, and language.  Tagalog contains words that are Spanish, Arabic, Sanskrit, Chinese, Malaysian, and even some bastardized English, among others.

And, in terms of Spanish, it has become commonplace for elderly Latina grandmothers to strike up Spanish conversations with me outside of the 99 cent store.  And other Latinos will talk to me in Spanish sometimes.  Needless to say, my high-school Spanish class with Senora Rossetti has been helpful on such occasions.

When at work, I want to speak Spagalog, but find that my mixture of Spanish and Tagalog is totally useless in this setting.  Or any other, for that matter.  Mainly due to the fact that what ends up coming out of my mouth is of no help to either the Latino or Filipino cultures.

My solution?  Lots of focus into speaking only Spanish, not some strange breed therein.  Either that, or, especially when it gets really crowded and busy at the Sanctuary, I speak English, and just cast it off to faith that they know what I’m talking about.

But, I have found out that whether they speak English or Spanish, I can still address their needs, even when giving a full body treatment.  Most of the folks who request a full body treatment at SACHR are in physical pain, and can show me through their facial expressions, hand gestures, and I can even tell by the way they walk and hold their body, where their pain is.  Of course, it’s even more helpful when we both fluently speak the same language, but it hasn’t been necessary.  I’ve started to hone in on what I’m hearing and seeing, which has been sharpening my intuitive skills, as well.  The result is often a patient who feels relief in their body.

And, even if we may not chat that much, and I just give a friendly “Hello”, smile, and insert ear needles ala NADA, their stress level reduces significantly already.

Healing on the go, and without boundaries!  Yet another perk of a medicine that’s been around for 2,000 years.

Now, to end on a relatively trivial, yet not so much, note:  Natalie Portman just revealed that she gets acupuncture to relieve stress.  Yes, we have won over Padme!