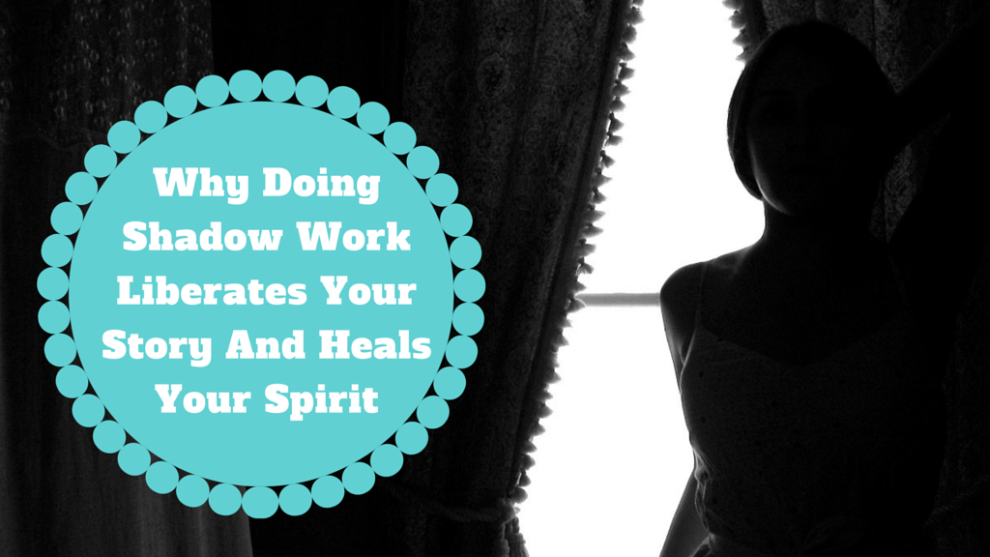 Original image "Shadow Woman" by Amy, used with permission under CC BY 2.0. Source.

Why Doing Shadow Work Liberates Your Story And Heals Your Spirit

Not many of you may know that before I became an Acupuncturist/Reiki Healer, I had a strong interest in psychology. So much so, that I almost majored in it in undergrad.

Although I ended up never pursuing psychology, the psyche, particularly mental health in relationship to Spirit, has always interested me.

Last week, one of my patients and I touched on a subject I knew she was interested in exploring, but was scared to death of.

It is not for the faint of heart. It requires that you get into all those parts you consider ugly about yourself, and look at them in all their dark, raw, pus-filled, pulsing glory.

What is shadow work?

Swiss psychiatrist Carl Jung says of the shadow side:

“It is a frightening thought that man also has a shadow side to him, consisting not just of little weaknesses – and foibles, but of a positively demonic dynamism. The individual seldom knows anything of this; to him, as an individual, it is incredible that he should ever in any circumstances go beyond himself. But let these harmless creatures form a mass, and there emerges a raging monster; and each individual is only one tiny cell in the monster’s body, so that for better or worse he must accompany it on its bloody rampages and even assist it to the utmost. Having a dark suspicion of these grim possibilities, man turns a blind eye to the shadow-side of human nature. Blindly he strives against the salutary dogma of original sin, which is yet so prodigiously true. Yes, he even hesitates to admit the conflict of which he is so painfully aware.” (“On the Psychology of the Unconscious” (1912). In CW 7: Two Essays on Analytical Psychology. P.35)

That’s right, there are no unicorns and rainbows where the shadow side is concerned. In fact, quite the opposite. And, it’s just as much alive as all the other parts that make us whole. Isn’t that a scary thought?

It doesn’t have to be. But, in order to do the work to get in touch with it, it can be downright frightening.

Examples of the shadow side manifesting show up when we:

Does this sound like you, ever, in your life? It should, because we’ve all been there!

Why do shadow work?

Q. So, why would one want to go there in the first place, and get in touch with all that which would be downright unpleasant?

A. To get liberated. From the control you’ve given it over your life, and the control it most likely has on whether or not you cultivate happiness on your terms. Yes, it’s that important.

When you delve into your shadow self, you shed much needed light into that part of your self. You acknowledge a part (or parts) of yourself that you’ve ignored, and which you’ve kept alive in secrecy. As with anything in darkness that has been festering for some time, it has grown comfortable there, and shining light on it may likely be excruciating. You may even resist in going there, at first. This is totally normal.

It’s like a clip from a scary movie, when the main character has a sneaking suspicion that there’s monster or disembodied, evil ghost lurking right behind the door. Who in their right mind wants to look behind that door?

Now imagine that all the things you’ve kept under lock and key from everyone in the world, maybe even to your subconscious mind, because you thought them too disgusting, vile, ugly, and unacceptable by anybody, including yourself?

As scary as it might be at first, looking at these aspects of yourself will give you a window into why you act the way you do. Why you judge others the way you do. Why you go off on yourself the way you do in ways you wouldn’t treat your worst enemy. Why, maybe, it was easier to hide behind a certain addiction (of any kind, whether it be recreational drugs, alcohol, tobacco, overwork, sugar, food, shopping, gambling, exercise, sex, body image, rage, you get the picture) than deal with a shadow side that’s grown to an overwhelming size that zoning out is a much more appealing option. Why you are so attached to appearing shiny and happy, lest people get the whiff of your impending nervous breakdown, due to ignoring parts of yourself that you refuse to see, but are fighting to get airtime.

And this is why doing shadow work liberates your story and heals your Spirit. Because you take away the power of the darkness within you, simply by recognizing it exists.

How do you do the shadow work?

One simple way is by observing where you judge people the most. What is it about your coworker that triggers such primal rage within you, or a certain sense of disgust? This is especially worth exploring when your reaction is quick and without logic.

Then, you start to unwind the story from there: Why is that aspect a trigger for me? Where did it come from? Who was the first person who introduced this dynamic in life? Why did I latch onto that, and how did it serve me at the time? Is it still serving me now?

See where you resist in your life – in yourself, with your partner, your blood and/or chosen family, your colleagues, in your daily interactions. Exploring this will often give you leads, as well. Where do you resist greatly in your life? Why? When did you start identifying this as a thing?

For some, the help of a good therapist can help lead us through this process.

In my private practice, if someone is coming to see me for a treatment, particularly Reiki (due to the direct energetic component that’s inherent in such a session), the shadow side may find air to breathe and be acknowledged. This may or may not happen before or after a Reiki treatment. Usually, if it’s a patient’s first time receiving a Reiki treatment, just the fact that the modality clears energetic debris from each energy center, or chakra, is enough to displace the shadow self of its safe haven. Sweeping out energetic cobwebs can have that effect.

I’ve seen this happen as a result of Acupuncture treatments, as well, since Acupuncture is also considered energy work in some circles (and in my book). When we circulate the Qi in healthier and balanced ways in the meridian pathways of the body, that often creates movement in previously stagnant energetic waters. Thus, creating healing not only of body; but, of mind, Spirit, and heart.

The goal is not to eradicate the shadow self; but, to integrate it in healthy ways into your whole being. This is done by acknowledging the shadow self, healing the stories it kept alive on your behalf and your survival (since it served a purpose at a given time in your life), and integrating it into your whole self, resulting in owning all of who you are, as well as greater compassion for yourself and others.

The added dynamic of shadow work for women 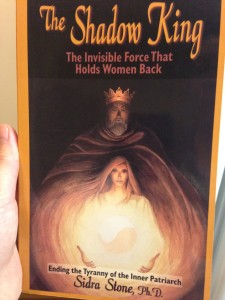 My personal copy of the book, The Shadow King, by Sidra Stone, Ph.D. 1997 edition.

To add a twist on this shadow work, women doing this kind of work may also want to explore what it means to internalize certain dynamics of the inner patriarch, which can often be alive and well, and part of what we use to judge ourselves in modern society.

To learn more about this part of myself, I read the book, The Shadow King: The Invisible Force That Holds Women Back (Ending the Tyranny of the Inner Patriarch), by Sidra Stone, Ph.D. I found it to be very helpful in seeing parts of myself I was not paying attention to, but was active in my psyche.

The intro says it all, “This book is for every woman who has put aside her own wisdom, deferred to others, and waited for permission to speak. It is also for her sister, the woman of power, who has learned how to speak up, but fears that in doing this she has sacrificed some intangible but precious aspect of her essential femininity.” My copy was published in 1997, around the time that I’d purchased it. I’m sure the latest edition is probably enhanced with more recent info (check out the Amazon link to the book, above).

Has this article on shadow work struck a chord in you?
If so, I’d love to hear about it, in the comments, below!

In liberation and ownership of self, 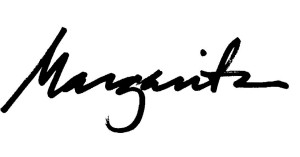 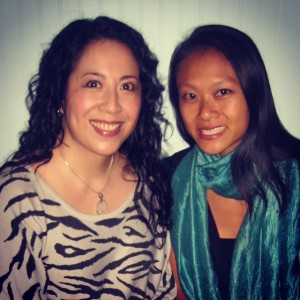 Chia-Ti Chiu, of One Love Wellness, and I will be joining forces again, this Spring, to jump start you into renewal and release of Liver Energy!

“Spring cleaning” doesn’t just refer to your closets… This is also the time to get light in your mind, body, and spirit.  Over the winter we tend to eat heavier foods, be less active, and accumulate more Kapha (earth energy).  The Indian science of Ayurveda cautions against an excess of Kapha, as it can cause sluggishness, excess mucus, headaches, achy joints, fatigue and lack of mental clarity.  Learn specific yoga poses and breathing exercises that will help to release surplus Kapha and shed toxins, to promote more rejuvenation and health for the Spring.

Spring is the wood element of Liver in Chinese Medicine. The Liver is the controller of the free flow of Qi within the body, regulating and balancing all the organ functions. Whenever this channel is obstructed, physical and/or emotional pain may result. Its sense organs are the eyes, its tissues are the sinews, and the emotion is anger, which helps us create new growth, or teaches us to find another way to flow when there’s resistance. Receive a mini-Acupuncture treatment during the Spring Renewal workshop to ground this Liver energy.

Reiki is an energy healing technique that uses “hands-on” and also “hands-off” positioning that can assist in relieving or reducing pain and discomfort by balancing the body’s energy centers, or chakras. It can be enjoyed as an individual treatment, or a group treatment. Workshop participants will be enjoying group Reiki after the Acupuncture treatment, and will be given an opportunity to get optimally situated before receiving the energy work.

Join Margarita and Chia-Ti as they lead you through the cleansing with the practices of Yoga, Acupuncture, and Reiki.

Copyright © 2015 by Alcantara Acupuncture & Healing Arts. All rights reserved. You may quote, copy, translate and link to this article, in its entirety, on free, non-donation based websites only, as long as you include the author name and a working link back to this website. All other uses are strictly prohibited.