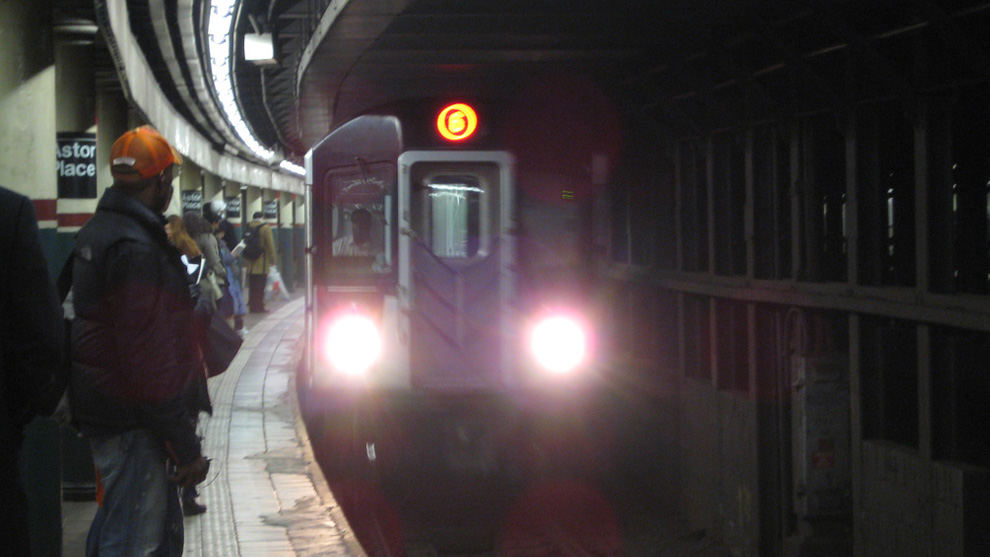 "6 train" (cropped) by Phil Whitehouse, used with permission under CC BY 2.0. Source.

You Know You’re A New Yorker When…

I could just finish that sentence by saying, “…when a stranger starts screaming in your subway car for no apparent reason, and makes you wonder if you should’ve carried a large bat in your backpack instead of that very thin gadget you have in there called a wallet.”  But that would oversimplify things, no?

Once and a while there are those instances that remind me that I live in one of the most unique places in the world (dare I say, the most unique?)  We live in a very accessible city, where you can walk to Ethiopian, Vietnamese, and vegan restaurants, enjoy them all in the same day, all within a few blocks radius.  If you have a craving in the middle of the night, and forgot to stock your fridge, you can head to the corner bodega store and get some munchies, and sometimes, some really good sandwiches.  There are constantly new shows of up-and-coming artists.  Zebra leggings are a sign of fashion, not of losing your marbles.  And we can also take the train/subway at any hour of the day, to get most anywhere within the 5 boroughs.  Yay, for those of us who are insomniacs!

So, on one particular day this January, I was running an errand, and took the 6 uptown (for those not familiar with our subway system, our trains either go by letter or number.)  Yes, this is the train J.Lo is referring to on her album “On the 6”.

Even though my iPod was blasting, I heard a sudden crashing of glass.  I, and a bunch of people, looked over, and the source of the noise was a guy who had smashed  some glass in a black drawstring bag.  He had a big smile on his face, evidently happy to get a rise out of everyone.   Perhaps I have been so widely exposed to the eccentricities of people in New York City, that instead of being alarmed, I checked the songs on my iPod instead.  Other people had gone back to what they were doing, as well, and resumed reading or staring catatonically at the ads of Dr. Zizmor (a self-proclaimed dermatologist) above the passengers in front of them.

Eventually, we all turned our heads towards the glass-crushing guy, who turns out to be a street magician.  During one trick, he takes out a small metal box.  He asks a seated passenger to open it, by pulling on the box’s handle.  She did so, and immediately, a big piece of grey fluff popped out!  She was horrified.  She screamed, “Aaaah!  Aaah!  Oh my God!  Oh my God!”  And she was flailing her arms up and down, not dissimilar to the way Margaret Cho flails her arms when imitating her upset mother.  I giggled.  I noticed that other folks were also amused, especially the younger guys on the train, who were laughing and shaking their heads.  The magician tried to show her it was only fluff, but by that time, the woman was so disturbed, she just waved her hand at him, and shook her head.  She later laid her hand on her chest, and continued to shake her head.

A few moments later, he pulled a dove out, which he held in his hands (it wasn’t flying through the train.)  I thought, “Oh, how cute!”  Then all of a sudden the woman who was disturbed by earlier said fluff started yelling again.  She was jumping in her seat, going, “Oh!  Oh!”, and shaking her head, her brows furrowed, waving her hand in front of her as if she smelled something awful.  Some of us folks on the train were either smiling or giggling.  Some of us made eye contact with each other.  It was as if we were watching a fiesty aunt trying to put out a fire!  There’s something to be said about having so many different cultures in NYC, yet we can all still connect on some level, as if we’re just family.  Having a giggle on that train ride made it worth this errand trip, alone!

I could easily go into “acupuncture mode”, and talk about this particular passenger’s fear of inanimate fluff balls being a Kidney disharmony, but I’ll pass on that for now.  I’ll just enjoy New York City for what it is — including the glass-breaking street magicians, and the aunties trying to put out fires that aren’t even there.

Only in New York!